Last year we published a post on Today’s Most Influential Floral Designers.

It was a real hit with lots of interaction in the comments.

So when we recently heard from one of the designers featured, we were excited.

It turns out that the guys from DK Designers (Dennis Kneepkens and Mick Stubbe) have been busy.

They were recently commissioned by high-end Japanese department store Mitsukoshi to create a piece of art for flower festival Hanabanasai, at their flagship store in Nihombashi, Tokyo.

Fortunately, Dennis and Mick were kind enough to share with us some photos from the festival.

All design work was done by DK Designers and the photography was by Keiko Chiba and Mick Stubbe. 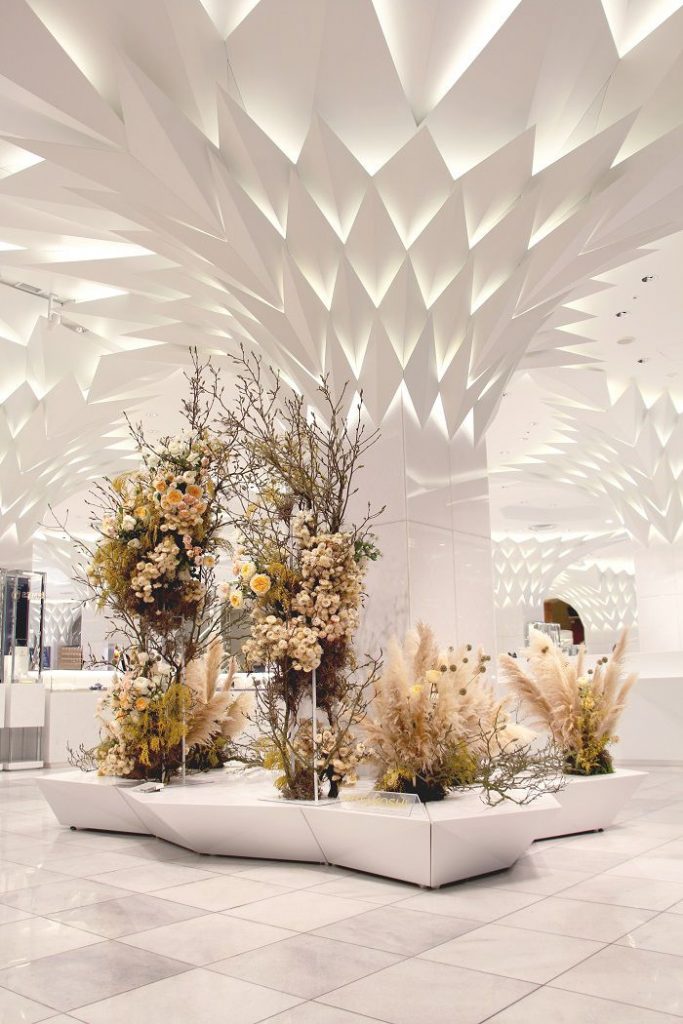 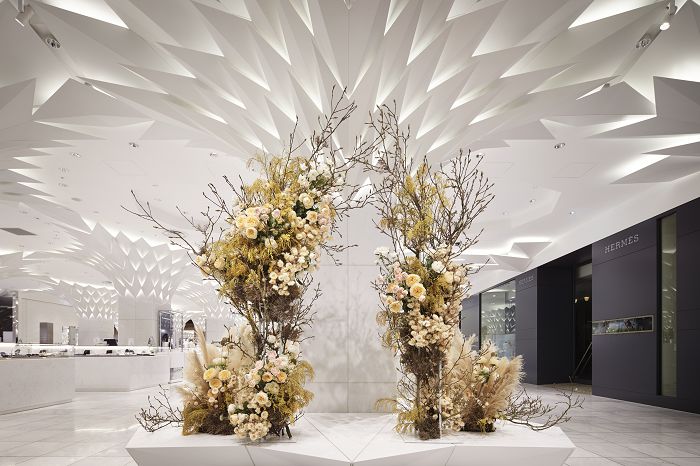 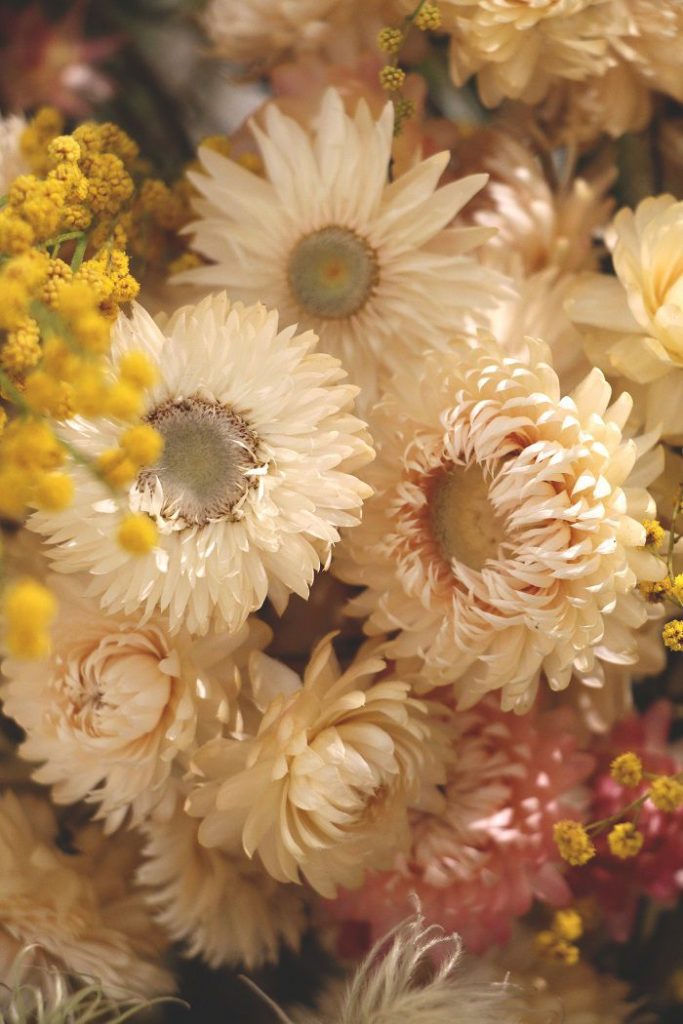 The side of the gateway featured contemporary gardens with a mix of dried and fresh flowers: cortaderia, scabiosa stellata and David Austin rosa Beatrice 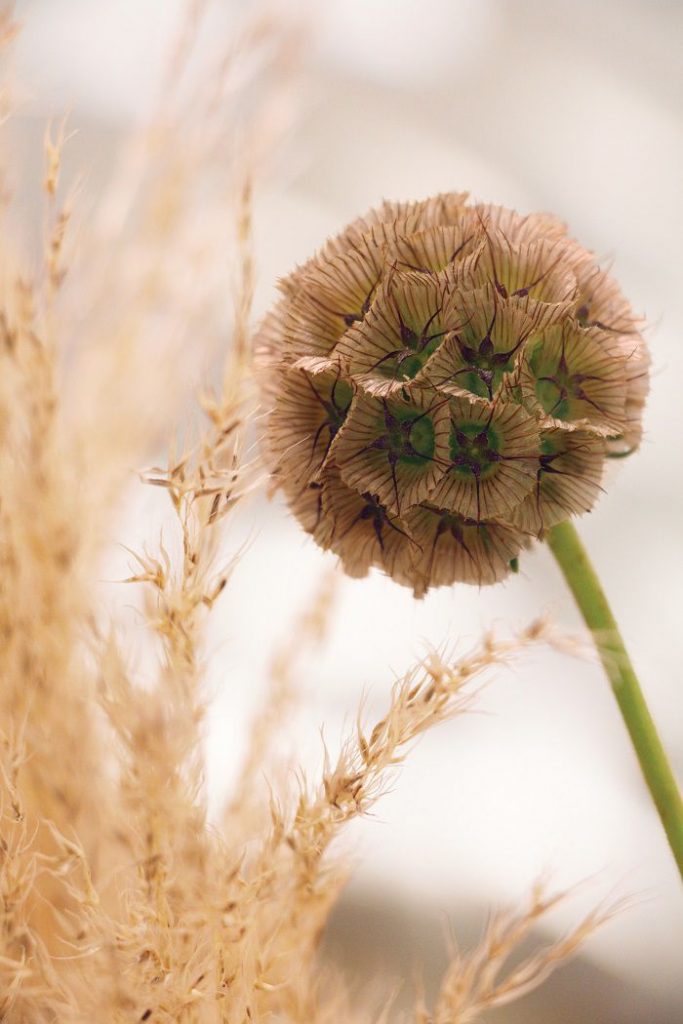 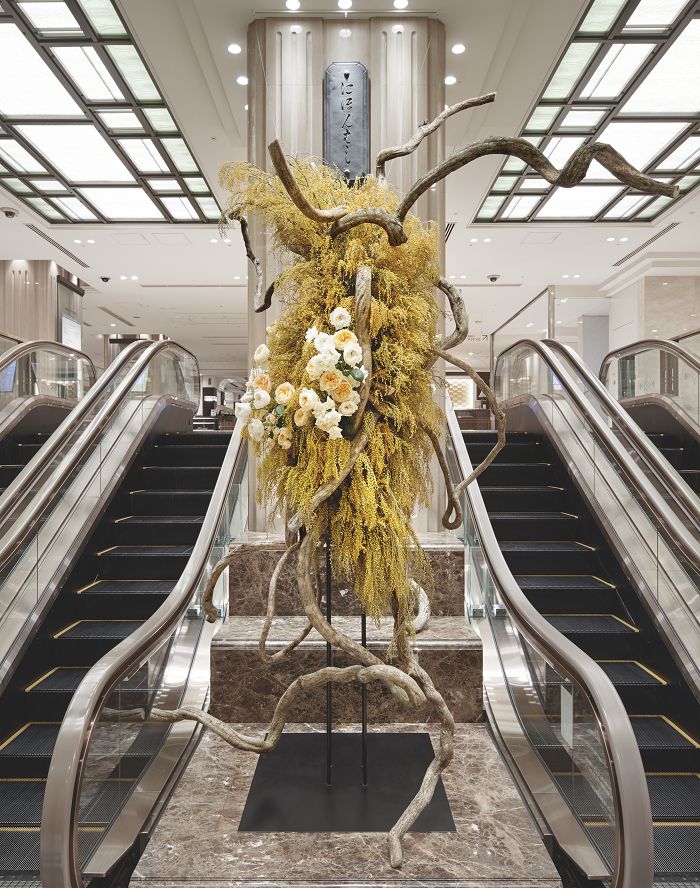 The contemporary art object of mimosa displayed in between the escalators was made out of base of thick, curly wisteria branches, dried mimosa and small selection of garden roses 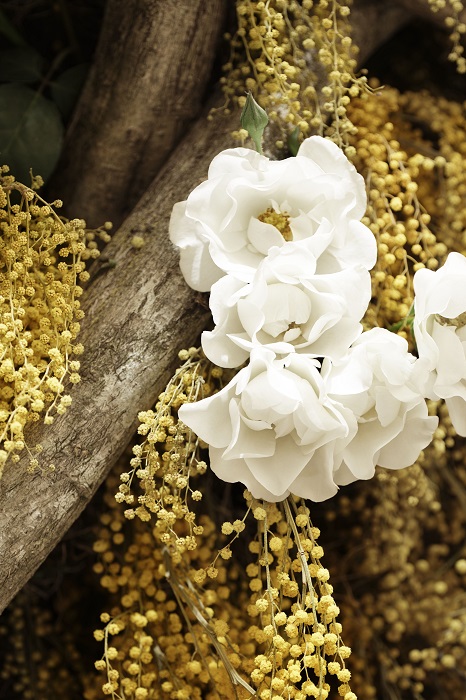 There were a couple of themes to this display:

With mimosa being the theme flower of the festival, for both designs, we decided to incorporate the flower’s cascading nature. We chose to soften the flower’s strong yellow and let it gently contrast the brand new origami-inspired ceiling designed by world-renowned architect Kengo Kuma. Combing the mimosa with soft tones of sand and buttercream coloured flowers such as David Austin Beatrice and local spray roses created a truly dreamy atmosphere.

The main challenge of the assignment was creating an art installation that would last for five weeks. Luckily dried flowers are a big trend at the moment and Mimosa, although shrinking, dries beautifully. Combined with helichrysum and Cortaderia we created the perfect base for a long-lasting showcase. 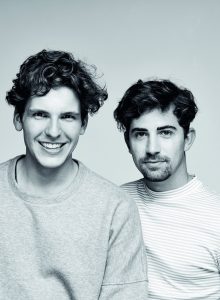 Q: Could you tell us a little about what Hanabanasai is all about?

Mick: Hanabanasai literally means ‘Flower Festival’ and is the Spring campaign of high-end department store Mitsukoshi Isetan. Developed as a celebration of life and being, each year the festival is noticeable by its abundant use of flowers.

Dennis: This year we were the lead floral designers for the Mitsukoshi Nihombashi store. Mick and I have always believed flowers and fashion are great attributes. And Hanabanasai is an amazing way to bring clients an extra dimension to shopping.

Q: How specific was Mitsukoshi in their desired outcome? Were you given the freedom to come up with the design you wanted?

Dennis: This year Mitsukoshi chose to specifically celebrate mimosa, a flower loved in Japanese culture. So of course working with its delicate yellow branches was mandatory.

Mick: The creative chief of Mitsukoshi Nihombashi also gave us two specific locations in the building, as well as the notion that our work should be able to survive for five weeks with minimal refreshing. But other than that the main request was to let our creativity flow.

Q: Can you walk us through the process you used to come up with the designs?

Dennis: Our design aesthetic is natural yet luxurious. We always try to recreate natural patterns but add abundance. In the design of the arch, the dried mimosa is placed as though it is growing naturally. The clouds of helichrysum make it feel dreamy and artistic.

Q: How did you go about choosing the colors used in the displays?

Dennis: Designing in a ton sûr ton colour scheme was an effective way to calm down the colours while adhering to the brief.

Q: What was the biggest challenge you encountered?

Mick: As a designer, you always find yourself between being practical – considering budgets, measurements, vase life, et cetera – and being artistic. In this case, the five-week duration of the festival hindered us to use too many fresh flowers but was an opportunity to work with dried materials.

Q: Where can we see your work next?

Dennis: We just finished a massive installation at a beautiful square in Timisoara, Romania and we are soon traveling to Beijing, China to teach floral design at fashion school Cohim.

Mick: Being international designers takes us all over the world, but sometimes the best thing is to come back to places visited before. In September we will be heading back to Japan for another project and we would love to see if we can work with Mitsukoshi Isetan again! 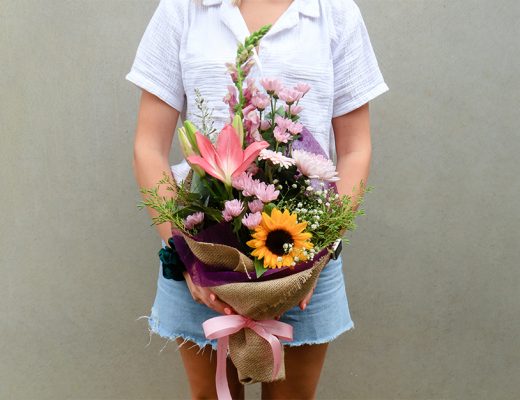 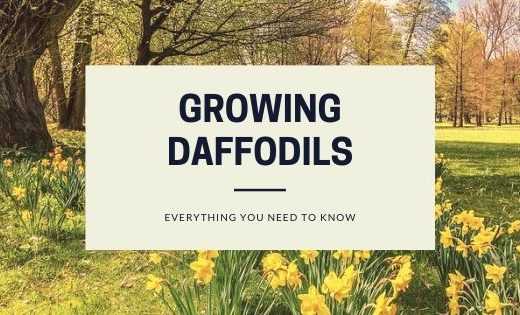 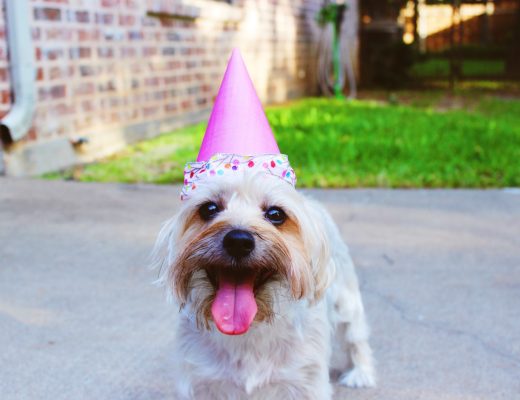